Skip to content
I’d like to share the paper I wrote for my senior thesis in linguistics from Carnegie Mellon University, Kernel Image Transformations: An exploration of transformational grammar in visual language. My advisor for this was the ever helpful and patient, Thomas Werner. A huge thank you to him for helping me cross the finish-line on this. 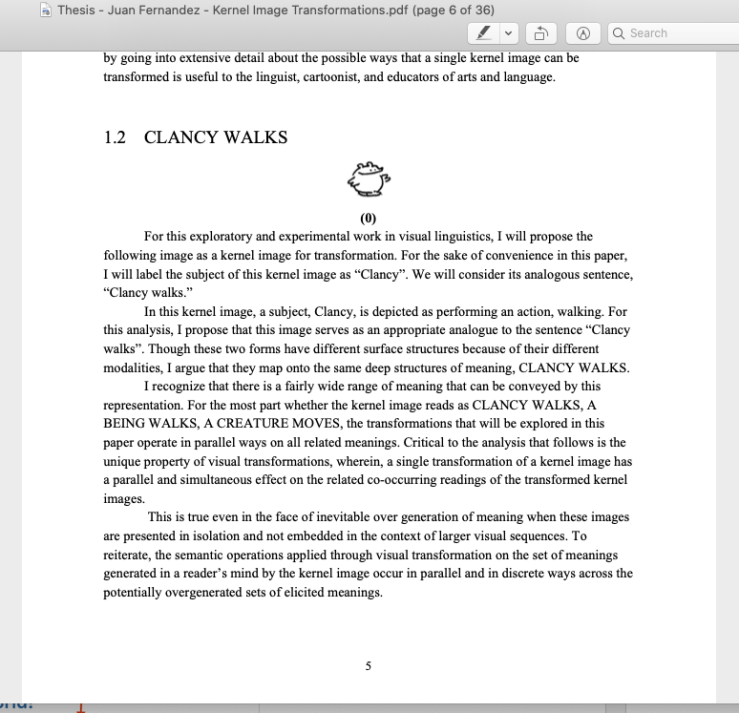 So, what’s it about? Well, essentially it’s a playfully pedantic look at what is going on at the granular level of communicative drawing. My goal here is to show the degree of intuitive meaning based knob twiddling that is involved when a drawer’s brain is set to work on communicating meaning.
Why did I spend a ton of time working on this? Bottom-line, I hadn’t seen this done. So, rather than keep looking for someone to talk about this in a way that made sense to me, I sought to make my own way.

Deep down, this way of structurally looking at the ways that a drawer reconfigures the different elements of the images they create is critical to how I teach visual composition to my students and that I use in my own work. It is also what I use to evaluate the qualities of the communications that I experience when looking at comics. To me, these transformations are the core act in visual communication.

This mechanism of transforming base images cuts across all aesthetics and narrative forms. I believe that so long as someone is drawing and wants those drawings to be understood a certain way, with intentionality, the processes I outline in this thesis are involved. As a maker, you learn these transformation techniques intuitively and don’t think much of what they are. It’s the blueprint of visual meaning making. I wanted to take a closer look at what seems to be written in invisible ink in our minds…

To get to the nuts and bolts of it, this paper presents a linguistic exploration of visual language from a drawer’s perspective. I argue that there is much to be gained by exploring this particular perspective in the nascent field of Visual Language Theory. It presents a working concept of the kernel image and its subsequent transformations, which I propose to operate similar to the concept of the kernel sentence as proposed by Zellig Harris in early notions of transformational grammar.

Big picture-wise, this paper  presents an exploratory catalogue of transformations of a single kernel image which I feel illuminate the array of processes involved in the grammatical and semantic composition used by the cartoonist.
It covers locational, temporal, and aspectual transformations. Altogether, this review shows how the kernel image transformation framework is especially revealing when trying to understand the observably systematized rules that are at play in a cartoonist’s encoding of meaning into sequences of visual language.

If that sounds interesting, be my guest and check it out!
Download: Kernel Image Transformations – Juan Fernandez
In the near future, I’m hoping to turn this into a zine that breaks things down into useful chunks for cartoonists/ visual communicators. Above all I just want to be able to have conversations with people about this compositional process, as it pertains to meaning making in images! If you wind up reading this and have some thoughts regarding this process, I’d love to talk. This is me building up on A LOT of people’s work, so I’m excited to be part of a larger conversation on this subject.

I’d love to know what you think!