The future of music is blasting out of the sound system at Zizek Club in Buenos Aires, Argentina. At Zizek DJs and producers mash-up Cumbia, Reggae, Hip-Hop and Electronic Music and create a space where musicians work with new ideas and the chance to show what they’re doing in the current music scene. Arguably the hot bed of the borderline avant-garde transformation of the Latin American sound of Cumbia, Zizek Club has created whirlwind of energy in just a few years time and has spawned the acclaimed record label, ZZK records. 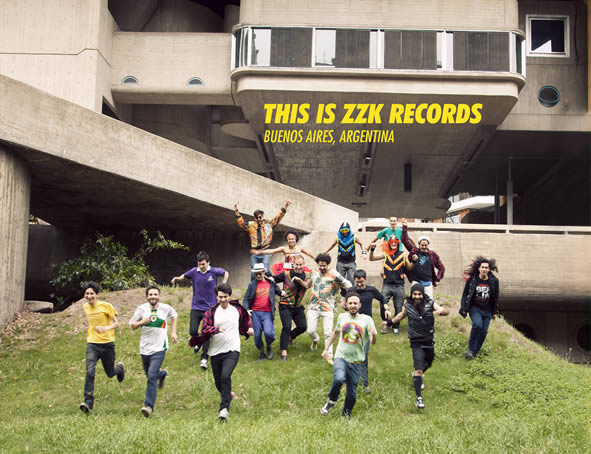 Born out of their weekly Zizek Club, the rapidly expanding crew of ZZK records all share a hunger for getting on the road and spreading their gospel. Established in 2008 by Texan Grant C. Dull, ZZK records now manages 11  “New Cumbia” groups with “Digital Cumbia” as its most active sound.

Dull first came to Argentina in 1999 and reinvented himself more than once, going from musicologist and online magazine editor, to visual artist for events and finally to curator and DJ. He founded the bilingual cultural website WhatsUpBuenosAires.com, and co-founded ZZK Records and Zizek Club with his Argentine partners. Behind the decks, Dull, who goes by El-G peppers his sets with live percussion, collaborates with his peers on stage and brings his unique vision of global music and culture to the arts community at large. It’s only natural that his label would do the same.

ZZK Belongs to a new movement of world rhythms born out of cities that are being reinterpreted using electronic music to make something new, fresh, and fun. Baile Funk from Brazil and Kuduro from Angola, popularized by M.I.A. and Buraka Som Sistema respectively evidence the rise of this global movement of sonic reinterpretation.

In the case of ZZK, membership to this new movement is shown by Tremor, an Argentine trio on ZZK Records. Tremor researches folklore traditions by region and bridges generations, geography and genre through technology to produce their signature style. Their sound is equal parts electronic music and native drum. It owes as much to anthropology as it does to popular music.

Mixing cumbia, bastard pop, and reggaeton, ZZK’s mission is to modernize the sounds of the night of the past.

Check out this teaser of what has recently been coming out of ZZK.

And be sure to marvel at this video of Mati Zundel’s Señor Montecostes done by Marco Lizama. Single frames in this video are studies of form and color as brilliant as any work of 20th century color theorists. It rules.

A personal favorite of mine from ZZK has been Chancha via Circuito‘s Rio Arriba. Thanks to him I’ve been listening to Jose Larralde continuously.